First things first: you may have heard the word diacetyl pronounced many different ways.  A couple of them are common, and largely depend on which country you are in.  The problem lies in the different ways that acetic ( \ə-ˈsē-tik-\) acid and acetate (\ˈa-sə-ˌtāt\) are usually pronounced. The common pronunciations of diacetyl are \ˌdī-ə-ˈsēt-əl, dī-ˈas-ət-əl\, and are based in turn how the acetyl group is pronounced.  I think more UK speakers pronounce with the long e, Americans with the second pronunciation.  You could finesse this issue entirely by saying 2,3-butanedione, which is the systematic nomenclature for this compound.  Here it is: 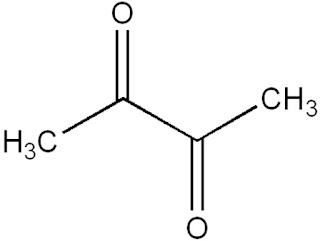 Any chemical structures which I post are generated by me, feel free to download to your collection under a noncommercial Creative Commons license. https://en.wikipedia.org/wiki/Creative_Commons_license

Diacetyl is a flaw in almost every style of beer if it is noticeable.  There are variations in how sensitive tasters are to the flavor and aroma.  At high levels the aroma is strongly artificial butter (which IS diacetyl).  At lower levels, diacetyl mixes with other flavors and aromas and is perceived more as butterscotch.  This level is acceptable in some beer styles, but even then moderation is desirable.  Even if a taster does not perceive any of these flavors and aromas, the taste will definitely seem off to the consumer.  The consumer would likely finish the beer, but not order another.  Diacetyl coats the tongue, and diminishes perception of hop bittering and hop flavor compounds.

There are several sources and sinks for diacetyl.  Diacetyl is produced during fermentation, then normally reduced by yeast enzymes to acetoin and 2,3-butanediol.  However, things can go awry with yeast.  If the fermentation is problematic, high diacetyl levels will be just part of a whole suite of symptoms, and the beer would not be released for public consumption.  The consumer would be more likely to experience high diacetyl levels from bacterial contamination, either in the package or through dirty beer lines.

A future post on diacetyl will get more into the weeds of chemistry.  Any beer judges want to hop in with their experience in detecting diacetyl, or its effects on the beers they judged?

Credit to https://www.merriam-webster.com/ for the pronunciations.
Posted by TheChemistryOfBeer at 8:59 PM