(Thanks to Mike Jablonsky for the title).  A lot of brewers know that alpha acids cause bitterness somehow.  In this article I will discuss just a little bit of their structure, names, and use. 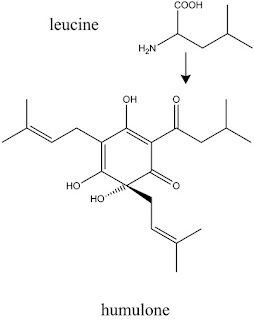 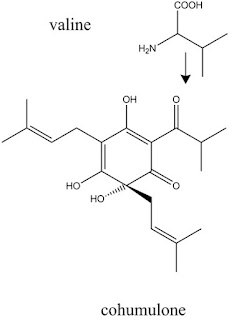 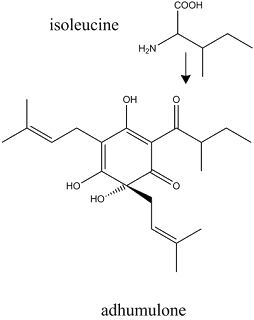 Looking at the bottom of the molecular structure, we see a hydroxyl group, and an isoprenyl group. Isoprenylation (commonly called prenylation) is a common building process in plant biochemistry.  If you replace the bottom hydroxyl of humulones with an isoprenyl group, you get the beta acids (lupulones). Lupulones are even less soluble in water, due to the switching out of a -OH group which can hydrogen bond with water, for a "hydrophobic chain" which cannot favorably interact with water.

Neither the alpha acids nor beta acids dissolve at a high enough concentration to impart any perceivable bitterness.  You must change these structures through isomerization.  That will be a separate topic for another day.


Posted by TheChemistryOfBeer at 6:40 PM