How many times have you heard that, maybe even from your own mouth? The classic India Pale Ale has a lot of bitterness, from iso-alpha acids (isohumulones).  Iso-alpha acids are so-called because they are the result of extraction of the less soluble alpha acids (humulones) from hops, and subsequent isomerization during the boiling of the wort (usually 60 minutes). 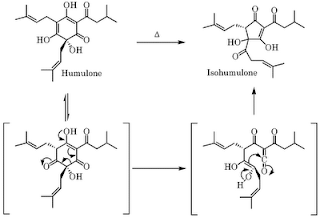 The same reaction occurs for cohumulone and adhumulone, which differ in the side chain on the upper right of the chemical structure. 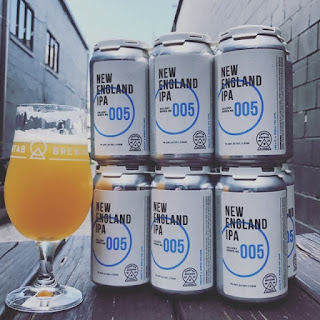 (Full disclosure: I really love IPAs of all styles).

The haze occurs from the hop oil compounds binding to protein and yeast.  They are best consumed fresh, as most IPAs are, but for different reasons. In each style of IPA, the hop character (bitter in classic IPA or "juicy" in New England IPA) diminishes and changes nature.

This post is inspired by a blog called The Mad Fermentationist, who is Michael Tonsmeire (author of the  book American Sour Beer ). 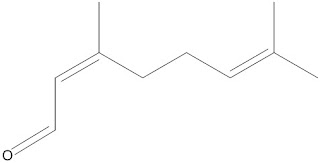 Apparently, monoterpene alcohols are transformed to other monoterpene alcohols during fermentation (see for example  "Biotransformation of Hop-Derived Monoterpene Alcohols by Lager Yeast and Their Contribution to the Flavor of Hopped Beer", Takoi, et al, J. Agric. Food Chem., 2010, 58 (8), pp 5050–5058 DOI: 10.1021/jf1000524).  What this means is that the flavor changes include actual modification of the hop compound profile that the brewer creates.

Another factor is that these monoterpenoids are also present in glycosylated form.  Hydrolysis (by yeast glucoside hydrolases) over time will increase the levels of unbound monoterpenoids.  This has also been found to be a factor in some of the more floral wines, such as muscat, reislings, gewurtztraminers and viogniers. (Park and Noble, "Monoterpenes and Monoterpene Glycosides in Wine Aromas", Beer and Wine Production, Chapter 6, pp 98–109, ACS Symposium Series, Vol. 536 , Chapter DOI: 10.1021/bk-1993-0536.ch006 )

A subsequent study by Takoi et al ,"Screening of Geraniol-rich Flavor Hop and Interesting Behavior of beta-Citronellol During Fermentation under Various Hop-Addition Timings", J. Am. Soc. Brew. Chem. 72(1):22-29, 2014. http://dx.doi.org/10.1094/ASBCJ-2014-0116-01 investigated the timings of hop additions, and their affect on the monoterpene alcohols. This study used Cascade (a hop used commonly in US IPAs such as Sierra Nevada), and the newer varieties Bravo and Mosaic.  As a matter of fact it is the use of these newer, nontraditional varieties that have led to an explosion of possibility in beer flavor beyond the IPAs you may have had before.  Other important newer hops are Azacca, Citra, and Galaxy.

Final reminder: drink New England IPAs as fresh as possible, and check the dates on the can before buying!


Posted by TheChemistryOfBeer at 3:39 PM